Alpoko Castle is the center of the Kingdom of Alpoko, located on an island north of Castle Town.

Alpoko Castle starts off very small, but is upgraded and expanded as the Kingdom of Alpoko grows. The princess' rooms are always next to the castle.

The castle starts out as a simple thatched roof building. The castle has three rooms; A Throne Room, King Corobo's bedroom, and a room for Liam and Verde.

The first castle upgrade consists of expanding the rooms, adding a second floor, and making the castle out of stone. The Room's Consist of; a grander throne room, armory, a bigger Bedroom, a records room, a treasury, and a room with a hole in it.

The final castle is called Bran Palace, and is very luxurious, with gold used in much of the construction and decoration. This upgrade adds a small chapel, second floor, a dungeon, an armory, a treasury, a library, a master bedroom, a grand throne room, and a game room. The outside has a giant wall surrounding it with a small threshold to get outside the walls and walk around the castle. The roof becomes accessible with a door to your room and a walkway to the top of the wall, where you may walk around. The stables become more grand and a small gazebo is added onto the path to the princesses' manor. The interior of the manor becomes bigger and a fountain is added. Many flowers are planted outside and the bridge expands. 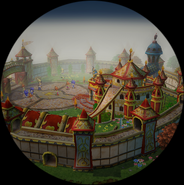 A drawing of the castle. 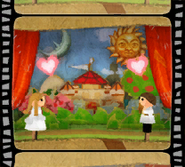 The Box theater containg the castle.

Corobo on the throne
Add a photo to this gallery
Retrieved from "https://littlekingsstory.fandom.com/wiki/Alpoko_Castle?oldid=12350"
Community content is available under CC-BY-SA unless otherwise noted.