The Bony Tunnel Entrance is a location in front of the Bony Tunnel, which acts as a hub for Corobo to enter the Kingdom of the Jolly and the Ripe Kingdom. It is accessed by a short area called Near Bony Tunnel.

The Bony Tunnel Entrance is a large meadow first entered through the area know as Near Bony Tunnel in the south. In the center is a constructible Jump Cannon, initially guarded by a ??? Pot Onii, the only one of its kind in The World, including Generated Quests. In the east is the Kingdom of the Jolly, guarded by three Moonflowers, and in the west is the Ripe Kingdom. This area is how Corobo accesses these two kingdoms in order to conquer them. After the Ripe Kingdom is conquered, the Wonder Spot for the Forest Cafeteria is located in the southwest corner. In the northwest is a rock containing an Onii Metal and an Expensive Box, worth several million Bol.

As the name suggests, the entrance to the Bony Tunnel is located in the north of the meadow. It is covered by a large rock that needs a Ripped Miner to be broken. As soon as it is broken, two Lotus Root Onii atop the nearby cliffs will start pelting bullets at citizens below. They will disappear once Corobo enters the Tunnel. As the nearby sign warns, this tunnel leads Corobo and company to the Skull Plains.

Entrance to the Kingdom of the Jolly

Entrance to the Ripe Kingdom 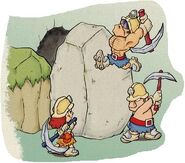 Artwork of Ripped Miners opening up the Bony Tunnel Entrance
Add a photo to this gallery
Retrieved from "https://littlekingsstory.fandom.com/wiki/Bony_Tunnel_Entrance?oldid=12559"
Community content is available under CC-BY-SA unless otherwise noted.