Broadcasters are the citizens of the Primetime Kingdom, with the job of running the TV station.

Broadcasters look much like their king, TV Dinnah, wearing a similar suit. There are two kinds of Broadcasters: ones with an antennae protruding from their head, and ones with their head replaced altogether by a camera.

Before the fight with TV Dinnah, many Broadcasters surround the Public Broadcast Tower, representing each major country or region of the real world, and makes references to real life events and TV stations, such as the New York City Station and the BBC. Some of these Broadcasters reveal hints towards the upcoming battle's quiz portion.

During the King TV Dinnah fight, several Broadcasters dress up as soldiers and army crawl towards the Corobo and his Royal Guard with machetes, while aeroplanes perform air raids on the battlefield.

After you defeat TV Dinnah, a lone Broadcaster will migrate to Alpoko, becoming a recruitable Job Class. They run Alpoko Television from this point onwards, and often talk about good shows and movies that have been airing.

As with all Job Classes originating from other Kingdoms, the Broadcaster has the fighting speed of a Soldier, but lacks the cling-on ability. The Broadcaster's general attributes are similar to the Eggan, being able to dig and aid construction, and their main use being the ability to destroy a specific type of obstacle, in this case being large TVs. These TVs are found solely in the north of Skull Plains, with one in particular blocking the entrance. Without the Broadcaster, this entire northern section of Skull Plains is unreachable, which contains Haunted Zone 1, the Foot-shaped Peninsula, and 6 Art pieces. The map hints at this by shaping one of the peninsulas to resemble the pylon-like structure on the Broadcaster's head.

The Broadcaster's default weapon is a handheld microphone. 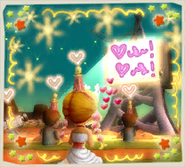 Broadcasters at the Wonder Spot location

Artwork from the King Story Official Guidebook
Retrieved from "https://littlekingsstory.fandom.com/wiki/Broadcaster?oldid=12285"
Community content is available under CC-BY-SA unless otherwise noted.