The Dark Valley (まっくら谷, Makkura tani) is the main region of the Onii Kingdom. After beating the Onii Man, King Corobo goes through Dark Valley via the Former Onii Grounds to fight the Onii King. The valley has various pots containing arrows and Oniis throwing pots at Corobo.

Once Corobo defeats the Onii King, Dark Valley gets renamed as "Dark Valley Nature Reserve" and is inhabited by Rodeo Cows in the valley and Black Sheep on the cliffs. Initially, this area was very dark, but becomes sunny when Corobo claims the area.

This area leads to the Valley of Memories, but also has a secret passage to Sunflower Plains on the top outer cliffside.

The music for Dark Valley is shared with Skull Plains. It is the only piece of music in Little King's Story which the classical origin of has not been identified.

The entrance to the Dark Valley 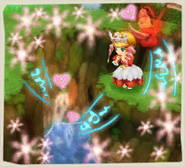 Wonder Spot picture of Haunted Zone 1
Add a photo to this gallery
Retrieved from "https://littlekingsstory.fandom.com/wiki/Dark_Valley?oldid=11942"
Community content is available under CC-BY-SA unless otherwise noted.