The Eggan Civilization Ruins is the center of the Worrywart Kingdom, and the fourteenth Wonder Spot. This where Corobo fought King Omelet. It is the home of the Eggans and houses King Omelet's giant egg. After the war, the area is ravished, and is turned into a history site for people to visit.

The Eggan Ruins are located within a brightly lit glade, found at the end of the Worrying Labyrinth in the west. At the center is the Giant Egg, and at the corners are four circular spots for quiz answers to appear. A cannon can be seen atop a wooden platform among the treer. The area is relatively tidy on the first visit, but after the battle between Corobo and Omelet, broken eggshells line the ground.

Upon Corobo's return visit to the area, several eggs will be sitting within the four corner spots, one of which contains an Art piece. A Wonder Spot for the area can be found at the foot of the egg. If Corobo has also conquered the Small Lot, then a gate in the east will lead to Miner's Town. 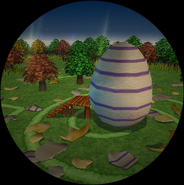 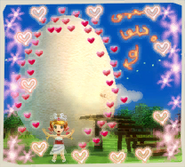 A Wonder Spot picture of the Eggan Ruins

The Giant Egg in the Worrywart Map icon

Concept art of the Eggan Ruins during the Omelet fight
Add a photo to this gallery
Retrieved from "https://littlekingsstory.fandom.com/wiki/Eggan_Civilization_Ruins?oldid=12525"
Community content is available under CC-BY-SA unless otherwise noted.