During his introduction, Ginger breaks the fourth wall by apologizing to the player about losing the Art pieces. He asks Corobo to help him find all 100 pieces, exchanging weapons and armor for found art. Once an art piece is found, it can be viewed in the King's Art Exhibit. He and the exhibit are located in Corobo's Forest.

Once Corobo finds 50 pieces, Ginger will ask Corobo to catch the winning piece which turned into a UMA.

The Art pieces vary depending which regional version of the game is played, and are based on entries from a competition held before the game's release.

In the English version, "Kyde" is a possible reference to a colloquial term for banana bread.

In Japanese version, "Jar" is a reference to a container that holds ginger spices. 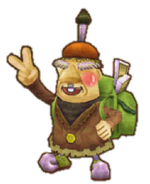 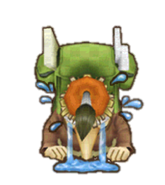 Ginger crying as seen on a sign
Add a photo to this gallery
Retrieved from "https://littlekingsstory.fandom.com/wiki/Ginger?oldid=11738"
Community content is available under CC-BY-SA unless otherwise noted.