Howser Oreganostein (ハウザー・オレガノシュタイン, Hauzā oreganoshutain) is a bull knight, and the rider of the noble steed Pancho. Howser is the advisor to King Corobo, and devises most of the plans for the Kingdom of Alpoko.

Throughout the adventure, Howser is in charge of enacting Kingdom Plans under the order of King Corobo, as well as delivering letters to Corobo that come way of the Suggestion Box. Howser also informs Corobo of various Merchants and Visitors that wish to greet the king, or strangers who are loitering on the bridge over the Alpoko River. Talking to Howser reveals his opinions on the other kingdoms, and how he feels their leaders are unfit for king.

Howser is first seen in the opening, where he discovers Corobo wandering in the forest, and witnesses the young boy stumble across the Magic Crown. After this, he assigns Corobo as the king of Alpoko, under the belief that Corobo is the one true king after 35 years of searching.

Howser informs Corobo that Alpoko is a desolate place to live, and needs treasure and employment to prosper. Howser encourages Corobo to put his citizens to work, so that they may raise money to create more jobs and eventually a Town Square with a Suggestion Box. Howser states that at their current rate, they will need a master plan in order to get Alpoko out of crisis, but admits that he cannot think anything that could work. This is until Corobo receives a letter from Captain Beefheart pertaining to a rumour of a Guardian known as the Cow Bones.

After Corobo defeats the Cow Bones and gains the lands it was guarding, Howser reveals his true idea for the Kingdom of Alpoko: World Domination. Howser believes The World should be unified under Alpoko, under King Corobo, the greatest king of all time. Howser pushes Corobo towards this goal throughout the adventure, even upon learning multiple times that The World is much bigger than anticipated. At first, Howser advises Corobo to defeat the Onii in the Meadow over the Bridge and claim that land, then the rest of the Onii Kingdom, and finally the 6 other existing Kingdoms.

Howser reveals many details of his grand battles and adventures from his prime throughout the story, most of which involve his steed, Pancho.

During several instances of earthquakes, Howser denounces Skinny Ray's ideas that the world is ending, going as far as to call votes on the matter of building the Flying Machine before voting against it.

Howser's theme is a faithful adaptation of "Toreador March" from Bizet's "Carmen".

After all Kingdoms are conquered and The World is under Corobo's iron fist, Howser gives in and admits that Skinny Ray is right about the earthquakes, after a Huge Earthquake shakes Alpoko. In this desperate hour, Howser supports the Flying Machine's construction and agrees that Corobo must go to the World of God.

Howser stands in front of the completed Flying Machine and must be talked to by Corobo in order for The King to fly to space. However, before Corobo can do so, Howser receives word from Pancho that the princesses are fighting.

During the events of the World of God, Howser rallies Corobo on to overcome what he finds there.

This allows Corobo to read letters from citizens, including quests which he may choose to accept. These quests may allow Corobo to face a Guardian, help a Princess, find parts of the Flying Machine, help or challenge characters such as Ginger and Uncle Tin, pay Minister salaries, and so on. Randomly Generated Quests can also appear, which will place a pre-set team somewhere in The World, and Corobo may face them for a reward; failing to do so in a time limit will discard the Generated Quest.

This allows Corobo to browse plans for Alpoko, which he can purchase using the national budget. This is the only place where Corobo can spend Bol. Under Special, Corobo can find miscellaneous plans such as the Alarm Clock, the Podium or the Jump Cannon. Under Power Up, Corobo can purchase upgrades to his Royal Guard Badges, Formations, Ordinances, Beans, and so on. The remaining menu options correlate with building plans for each town and city within Alpoko; for example, Corobo may choose to build the Soup Church in Castle Town.

Howser's name could be a reference to Hausa, a culture of people known for producing Hausa food, which consists of grains and herbs. Oreganostein is based on "oregano", a type of herb.

Howser rising Pancho in a trailer 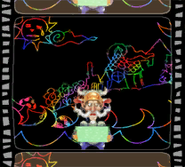 Howser in a cutscene 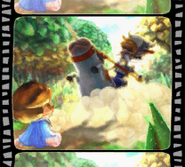 Howser in an unused cutscene
Add a photo to this gallery
Retrieved from "https://littlekingsstory.fandom.com/wiki/Howser?oldid=12411"
Community content is available under CC-BY-SA unless otherwise noted.