Kampbell (コツトン, Kotsuton) is a priest who runs the Soup Church on behalf of the Sect. of Soup. Kampbell believes strongly in God, claiming that those who have sinned will be punished.

Kampbell is first encountered by King Corobo after he defeats Guardian Cow Bones, ridding the surrounding land of its UMA. After Cow Bones is defeated, he will ask the young king to build him a church, which can be used to marry citizens and obtain Carefree Children.

Kampbell has conflicting views with Skinny Ray over the reasons why the earthquakes are occurring. The priest believes that the Flying Machine will only cause more problems for the world .

Kampbell's name appears to be a reference to "Campbell's", a soup company. This makes sense, as he is a follower of the Sect of Soup.

In the Japanese, French and Spanish versions, Kampbell's name is an anagram of his religion. 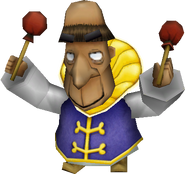 Kampbell
Retrieved from "https://littlekingsstory.fandom.com/wiki/Kampbell?oldid=10505"
Community content is available under CC-BY-SA unless otherwise noted.