King Story Official Guidebook (王様物語 公式ガイドブック, Ōsama monogatari kōshiki gaidobukku) is a guidebook released by Marvelous Entertainment Inc. shortly after Little King's Story's Japanese release. It includes a wealth of information on Little King's Story, as well as exclusive concept art, official artwork, statistics for quests, and messages from developers. It is themed after the sketchbook found in the World of God, with tape, doodles, and binder rings.

A World Map with all major areas noted.

A walkthrough of each area and boss individually. Characters give hints throughout this section, such as Bouquet explaining how to fight the Giant Zoeter using formulas. A subsection details different events at different times of day, including various citizens' lives.

This section contains a large table containing the value of every spoils drop in the game, a list of all God Memos and Flying Machine clues via God Quests, and a list of all Weapons and Armor (Treasure).

Bios on every main character: Corobo, the Ministers, Alpokians, the Princesses, the Rival Kings, and the four immigrant Jobs.

A recreation of the UMA Book with additional information.

Information on the development staff behind Little King's Story.

Tidbits on the end of the game, World of God, as well as extras such as how to make Omelet's quiz easier.

The paper back of the guidebook

The inner paper cover of the guidebook 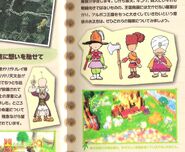 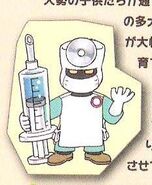 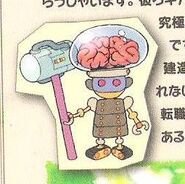 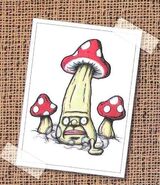 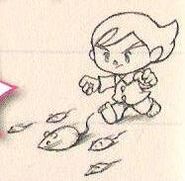 Add a photo to this gallery
Retrieved from "https://littlekingsstory.fandom.com/wiki/King_Story_Official_Guidebook?oldid=12406"
Community content is available under CC-BY-SA unless otherwise noted.