The name of this article is an unofficial translation of official text and may be not be entirely accurate.

王様物語ワラワラ実況DVD (Ōsama monogatari warawara jikkyō DVD, "The King Story Shuffling-Around Let's Play DVD") was a promotional DVD for Little King's Story that was released in Japan only, provided by Marvelous Entertainment. It contained three videos: "Live Video", "Understanding the Game Content" and a third one that appears to be related to the TGS 2008 beta version of the game. It also contains promotional material for three other Marvelous Wii games: Valhalla Knight, Arc Rise Fantasia and Muramasa: the Demon Blade. Japanese gaming news website Famitsu allowed 20 people to apply for the DVD by midnight of August 16th 2009 to receive it later, but it also came bundled with some Japanese copies of the game. [1]

A special keyword was also included to allow access to certain bonuses. The keyword was KING. [2] 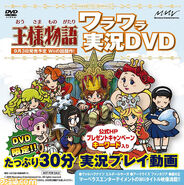 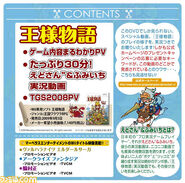 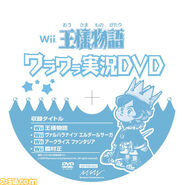 DVD print
Add a photo to this gallery

Retrieved from "https://littlekingsstory.fandom.com/wiki/King_Story_Promo_DVD?oldid=13928"
Community content is available under CC-BY-SA unless otherwise noted.