The Melon Patch is located just past Sunflower Plains via a bridge, and leads to Near Boney Tunnel. It is featured as the fourth Wonder Spot.

The Melon Patch's most notable feature is that it holds the only Korobokle UMA in The World outside of Generated Quests. If Corobo is seen by the Korobokle, it will alert the nearby resting Meloncholies to attack.

Scattered around the area are many destroyed melons, suggesting previous battles have taken place. There are some windmills decorating the nearby hills, along with scarecrows and sunflowers, although none of the latter are secretly Moonflowers, unlike the previous area. 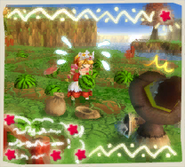 A Wonder Spot at the Melon Patch.

Melon Patch in New Little King's Story
Add a photo to this gallery
Retrieved from "https://littlekingsstory.fandom.com/wiki/Melon_Patch?oldid=12507"
Community content is available under CC-BY-SA unless otherwise noted.