The Mush Geezer is an UMA, and the Guardian of the Shadow Forest, resembling a large, elderly mushroom with bushy eyebrows and a wrinkled stem, holding up a white cap.

During its Guardian battle, the Mush Geezer stays in the same spot. Mush Men will spawn at random around his feet. 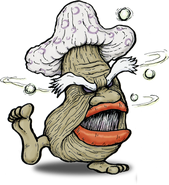 Artworks of citizens battling a Mush Geezer
Retrieved from "https://littlekingsstory.fandom.com/wiki/Mush_Geezer?oldid=10275"
Community content is available under CC-BY-SA unless otherwise noted.