The Nature Maze, also known as the Worrying Labyrinth, is a region of the Worrywart Kingdom. As the name suggests, it is a hedge maze, and was designed to make anyone lost inside it question themselves and their life's purpose. It is accessed from Skull Plains, and leads to the the Eggan Ruins.

When Corobo first enters the Worrywart Kingdom, he is required to navigate the Nature Maze to the end. A cutout in Corobo's shape at the entrance forces him to venture into the maze alone, without his Royal Guard. The maze itself is not large, but has several walls that must be broken by Corobo's sceptre, as well as shrubbery that covers the way forward, and Cockadoodledo UMA that will chase Corobo if he gets too close.

Once King Omelet is defeated, the Nature Maze is never revisited, being one of the few areas that can only be explored once. Upon entering the maze, Corobo and his Royal Guard will instead be warped to the entrance of the Eggan Civilization Ruins, skipping the maze entirely. Therefore, the maze itself has no collectibles inside it, and all collectibles related to the maze appear outside the entrance or exit.

During Corobo's time in the maze, he may read Whispers hanging on the hedge walls, which explain the life of a mysterious, unidentified figure from their birth to their death, and details their worries and anxieties over the course of their life. The signs also act as a way to mark Corobo's progress through the maze. There are seven in total.

A Wonder Spot location can be found to the left of the entrance.

Whisper from the Cradle

Everyone is the same when they are born. But everything is actually decided at birth. I came into this world after considering whether I wanted this life.

Whisper of a 6 Year Old

I played with Susie when I was in kindergarten. Susie played with Bob. I hate Bob. I'm better than Bob. I wonder who Susie likes better.

Whisper of a 10 Year Old

Whisper of an 18 Year Old

I worked part time at a burger place so I could buy my girlfriend a gift. I saved up a lot of money and bought her that gift, but she ended up dumping me anyway. I'm so stupid. I never knew she was dating some rich guy at the time. So I guess it's people with money that are suppose to be the greatest.

Whisper of a Grownup

Before I knew it, I was working everyday. The more I worked, the more I could give my family a better life. But is endless toil all there is to life? A life with nothing but work. A life only to support my family. Is this true happiness?

Whisper of a Geriatric

One day I awoke to find myself in a retirement home with only other old folks around me. I don't have any kind of terminal illness, but I continue to feel incredibly depressed. I'm afraid of dying. I don't want to die. Will I just wander aimlessly for the short remainder of my now meaningless life?

Whisper from the Grave

Before I realized it, I was in my grave. My body was in the earth. I am no longer in this world. In the end, my life was full of worries that just never seemed to come to an end. Oh? What am I doing?!? I am worrying even after death. 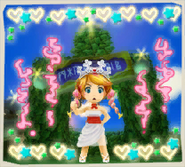 A Wonder Spot picture of the Nature Maze.
Add a photo to this gallery
Retrieved from "https://littlekingsstory.fandom.com/wiki/Nature_Maze?oldid=11897"
Community content is available under CC-BY-SA unless otherwise noted.