"At the end of the world Still being built! Still buried in trash!"
— Princess Apricot

New Island Park (できかけ島 記念公園, Dekikake shima kinen kōen), also known as the Island Commemorative Park, is the center of New Island. This is where King Jumbo Champloon was fought.

The Island Commemorative Park is the least developed area of New Island, located in the south of the kingdom. The surrounding cliffs are almost completely made of cardboard. A brick-block slope lies on the east side, and is used to dodge attacks in Jumbo Champloon's battle, and there are three gates on the southernmost cliffs that provided Worker Onii to heal Champloon.

After Champloon's defeat, his remains lie in the middle of this plain. The Propeller spins at the top of the pile, and will knock Corobo down if he approaches it. Corobo will later acquire this Propeller in the God Forecast quest. At the foot of the remains sits a Jump Cannon that needs building, and Wonder Spot number 18 not far from it.

To the east is a glade accessible via Craftian, containing an Art piece, a hidden hole, and some gold pots with Gold Bars inside. To the west, also requiring a Craftian to access, is a set of constructible bridges that join New Island to the Over-there-Beach in the Kingdom of Alpoko. Between the two bridges is an islet containing another Art piece. 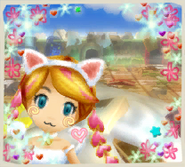 Concept art of Jumbo Champloon's arena
Add a photo to this gallery
Retrieved from "https://littlekingsstory.fandom.com/wiki/New_Island_Park?oldid=12443"
Community content is available under CC-BY-SA unless otherwise noted.