New Little King's Story (王と魔王と７人の姫君たち ～新・王様物語～ Ō to Maō to Nananin no Himegimitachi ~Shin Ō-sama Monogatari~, "The King, The Demon King and the Seven Princesses ~New King Story~") is a reimagined interpretation of Little King's Story, first released on the PlayStation Vita in Japan on September 27, 2012. It was originally marketed as a sequel, before being revealed as a reimagining closer to release.

This version features full touch-based controls, due to being on the PS Vita. The game uses the system's power for a visual engine that can show seamless time and weather shifts.

The digital version of the game was taken offline in 2017 without any announcement. The game is therefore no longer available in North America, due to being a digital release only in that region.

The Corobo seen in this game starts as an already successful king who rules the world. During a dinner party with seven princesses, a dark force attacks the castle and steals the princesses. Azul, a newly introduced character and nephew of Howser, leads Corobo through a secret passage out of the castle to safety with a specially trained Royal Guard. Soon after, the Castle is destroyed and the Royal Guard are lost in an explosion. The King starts anew to rebuild his province from scratch. Instead of challenging rival kings, Corobo is trying to find the seven princesses again, since they possess magic powers. Each princess is trapped in a Pillar of Light, guarded by a boss, some of which make return appearances from the first game. Characters such as Skinny Ray are omitted entirely, with new characters such as Florence in their place. Some locations have their names changed, such as the Jolly Kingdom being called the Land of Cherry Blossoms, since they are no longer kingdoms.

Halfway through the game, the attacker of the Castle is revealed to be The Nightmare, a very powerful entity who is very evil. The Nightmare can only be defeated through the power of friendship, as well as the crystals of light around the world, which are detected by each princess's magical powers.

In New Little King's Story, the princesses are based more closely on tropes of Japanese animation, resulting in a "harem" at the end, as opposed to their ongoing conflict in Little King's Story. Apricot, Shizuka, and Kokomo all return, with the former two receiving altered personalities to fit the theming of the game. Bouquet is replaced with Sakura, a stoic wearing a kimono, saved from Boss Tengu. Spumoni is replaced with Amabile, a young, skinny "lolicon" character who also likes sweets. Ferne is replaced by Iris, a woman who drinks sometimes. Martel is replaced by Corina, a robot in a skin-tight jumpsuit who also resembles the "loli" stereotype, saved from an Onii on New Island.

There are several hints that the whole story is simply a bad dream, and never took place.

New Little King's Story was met with a mixed reception, with many complaints surrounding the transition to the Vita. The game has been criticised for frequent performance issues, micro-transactions, and serving a fairly straightforward story. Several outlets were unimpressed to see the quirky humour and unique oil-painting aesthetic of the 2009 game replaced with anime-inspired tropes and visuals, despite the quality of the character redesigns. This new direction was unpopular with some compared to the international appeal intended for the first game, and appears to have been implemented to sate the PS Vita's core audience, since the system was often seen as a hit for fans of JRPGs. The English version was also scrutinised for its particularly poor translation, which also lacks the voice acting the Japanese version boasted; Philip Kollar from Polygon cites several instances of this, such as the line, "The crystal is the key bringing the end in the world to this dreams and phantasms." Many who had missed the chance to experience the original enjoyed the Vita version, as well as those who wanted the RTS-RPG experience of Little King's Story on the go.

The director and producer of Little King's Story, Yoshiro Kimura, was not invited to work on New Little King's Story. He has stated on Twitter that while he was partially happy for this game, watching its development before release made him cry.

What appears to be the entrance to the Onii King battle in Dark Valley.

What appears to be the first upgrade to Alpoko Castle.

What appears to be the Cow Bones guardian battle.

Corobo, Mr. M, and what appears to be Liam.

Artwork of Howser, Azure, and Verde

In game dialog with Princess Apricot

Artwork of Iris, Sakura, and Corina

What appears to be the new look for Jumbo Champloon 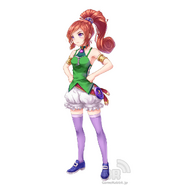 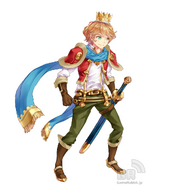 A couple of Moonflowers 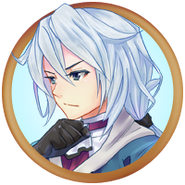 Retrieved from "https://littlekingsstory.fandom.com/wiki/New_Little_King%27s_Story?oldid=11948"
Community content is available under CC-BY-SA unless otherwise noted.