Ogre Ergo is the Guardian UMA of the Torn Forest.

The fight with Ogre Ergo is basically running around a giant tree stump avoiding Ogre Ergo's attacks. There are various logs that can slow you down and it is reccomended that you use your Lumberjacks to cut them down and begin chase. Once you are close enough to Ogre Ergo, send in your Grunt Soldiers and Animal Hunters, and try to take down a quarter of his health. After you take down a quarter of Ogre Ergo's health he will become enraged from time to time. When Ogre Ergo is enraged he will throw Meat Cleavers from a range at your Royal Guard. Also, when Ogre Ergo is enraged he is invincible, so order a retreat whenever you see him fuming. Ogre Ergo will also throw his sword at you in a circle around the tree stump, like a boomerang. Avoid this by staying very close to the tree stump. Keep avoiding these attacks until Orge Ergo becomes calm again. Now repeat this process a few more times until Ogre Ergo falls. After defeating Orge Ergo the Torn Forest gets cleansed of UMA and becomes Soldier Town . 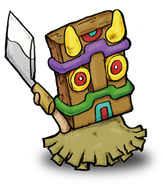 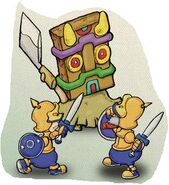 Another shot of Ogre Ergo in New Little King's Story
Retrieved from "https://littlekingsstory.fandom.com/wiki/Ogre_Ergo?oldid=10700"
Community content is available under CC-BY-SA unless otherwise noted.