"I want to collect the world's gems, I'll make it worth your while!"
— Princess Ferne Branca

Princess Ferne Branca (フェルネ・ブランカ姫 Ferune Buranka Hime) is the princess that King Corobo saves after defeating Long Sauvage. She is one of the princesses that Corobo can marry during the game.

Ferne is a conventionally sexy woman, with a passion for romance and vanity. Her special quest for Corobo to find the Kingstone Jewels.

Being one of the sexiest princesses, her cleavage is known to cause many men to get into accidents. The slit in Ferne's dress exposes her long legs as she walks. Ferne's trademark is a bewitching purple rose and her hobby is jewelry.

Where's that tall, bearded weirdo? Hhhmmmmm... Ooh, you are a king! My name is Ferne, the pleasure is mines. Are you willing to collect gems for me, my King? If you can collect them all, I might do something for you.

Ferne has her long, wavy red hair shaped like thorns. She has blue eyes and wears purple eyeshadow. Ferne has a silver crown in the shape of a rose and has one gold bangle on each wrist. She is wearing a long brown dress which accentuates her cleavage over nude stockings and black shoes. She can be seen carrying a purple rose.

Ferne Branca is named after the Italian drink, Fernet-Branca, made from a number of herbs and spices. 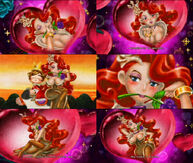 Ferne's letter
Add a photo to this gallery
Retrieved from "https://littlekingsstory.fandom.com/wiki/Princess_Ferne?oldid=10829"
Community content is available under CC-BY-SA unless otherwise noted.