Princess Martel Daisy (マーテルデイジー姫 Māteru Deiji Hime) is the princess that King Corobo saves after defeating Jumbo Champloon. She is one of the princesses that Corobo can marry during the game.

Martel is very competitive and loves breaking world records. Her special quest for Corobo is to break all of the records in her book.

An adorable princess who makes the sound of a car horn whenever she's happy or sad. Honk honk! She is always riding in her cute car, the Red Stallion. (Note: She's actually an adult!)

Vroom vroom! Where am I? We can go driving or play in the sandbox... I'm not sure what else... Oh, Kingie-poo, wanna set some records for me? I know you can beat them all! (Note: I'm an adult!)

Martel is very short and loves to ride in her toy red car, the Red Stallion. She has purple hair and brown eyes, her hair is put into buns with two strawberry clips. Martel is wearing a blue sleeveless dress with a white strapped strawberry purse slung around her shoulder.

Martel Daisy is named after the mixed drink, martell daisy, made from martell (a cognac) and brandy. 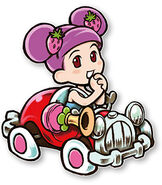 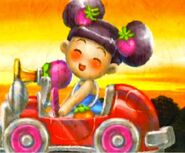 Martel's letter
Add a photo to this gallery
Retrieved from "https://littlekingsstory.fandom.com/wiki/Princess_Martel?oldid=10830"
Community content is available under CC-BY-SA unless otherwise noted.