Princess Shizuka Moroboshi (諸星シズカ姫 Moroboshi Shizuka Hime) also known as the Mother of All, is the princess that King Corobo saves after defeating King Omelet. She is one of the princesses that Corobo can marry during the game.

During God UFO, Shizuka explains the role of the Diamond Egg that she is carrying, and she becomes temporarily abducted by UFOs. After this, her special quest begins, where Corobo is tasked with finding the missing animals from Alpoko.

Shizuka is an exotic high-school student who was abducted by an UFO in the past. She mutters about mysterious events while looking at the sky at a 40 degree angle. Always holding onto a mysterious egg, Shizuka will never part with it.

Shizuka has long black hair parted into two long ponytails and wearing a white headband. She has violet eyes and has a mole below her right eye. She is always carrying a mysterious egg called the Diamond Egg. Shizuka is wearing a summer version of a Japanese schoolgirl uniform consisting of a white shirt with a navy sailor-suited collar and skirt.

Shizuka's given name is named after the term, shizuku (雫 shizuku, drip), a drip-pressed technique used in sake. There is a sake called Ginga Shizuku (銀河雫 Ginga Shizuku, Divine Droplets), which you can read 銀河 (ginga) as "Milky Way; galaxy" which reflects Shizuka's fascination with outer space. Shizuka is also a female given name in Japan, written as 静 (calm), 静花 (calm flower), or 静香 (calm fragrance).

To be consistent with her outer space theme, Shizuka's surname, 諸星 (Moroboshi), is a Japanese surname meaning "many stars". 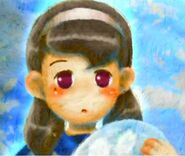 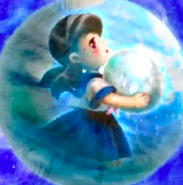 Memo for a piece of the Flying Machine

Shizuka's letter
Add a photo to this gallery

Retrieved from "https://littlekingsstory.fandom.com/wiki/Princess_Shizuka?oldid=11422"
Community content is available under CC-BY-SA unless otherwise noted.