"King, I may be a divorcee, but I love you more than steak! I could just eat you right up!"
— Princess Monica Spumoni

Princess Monica Spumoni (モニカ・スプモーニ姫 Monika Supumōni Hime) is the princess that King Corobo saves after defeating King Shishkebaboo. She is one of the princesses that Corobo can marry during the game.

Princess Spumoni is a connoisseur of foods and asks Corobo to find all the different types of food for her. In her divorce papers, she says she loves the king so much she is willing to change how she looks for him.

Spumoni is a plump and cute Princess with a broad mind. She is also the former wife of King Shishkebaboo. Her dream is to eat all of the food in the world.

Shishikebaboo...?! You've beaten that useless husband of mines? Oh, King, I love you more than steak! My dream is to eat up the food from all around the world. Oh, the cows and chickens, I will eat you up soon!

Spumoni has reddish-brown hair and blue eyes. Her short hair is put into curls and she is wearing a golden three-pronged crown. She is wearing a yellow sleeveless dress with pink buttons on the back and a blue ribbon adorned with a heart around her waist. She has on pink flat shoes with bows on them.

Monica Spumoni's surname is named after the cocktail, spumoni, made from an Italian bitter liqueur, grapefruit juice, and tonic water. From the Italian word "spumare," meaning "to foam up." 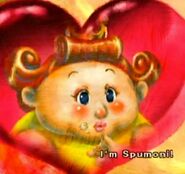 Spumoni's letter
Add a photo to this gallery

Retrieved from "https://littlekingsstory.fandom.com/wiki/Princess_Spumoni?oldid=10826"
Community content is available under CC-BY-SA unless otherwise noted.