The Screw-Loose Isles is an area of the Primetime Kingdom, accessible only via a TV in Skull Plains Lake. They are an archipelago in the middle of a large lake that make up most of the landmass of the Primetime Kingdom. The various islands can be navigated with teleporting TVs that eventually lead to the Public Broadcast Tower. This mechanic is designed to simulate browsing channels on a TV.

When Corobo first comes here he is separated from his Royal Guard, and has to find them all to recruit them again. Talking to the citizens will either have them say "King Corobo! You saved me!" or "King Corobo! I was waiting for you!" or "SOS! SOS!" with the exception of the Craftian. One Island contains an Art piece, while another has a Hot Spring. Many islands contain Lotus Root Onii, which fire seeds at Corobo and his Royal Guard from afar. Some islands lead to these Onii, allowing Corobo and company to dispatch of them.

Subsequent visits after defeating TV Dinnah will have a TV to the start of the area, allowing Corobo to return to Skull Plains Lake, as well as adding a Wonder Spot location to one of the Islands.

One of these islands is only available once, through the God TV quest, and contains a Flying Machine part.

Screw-loose is a slang term meaning crazy. It was possible chosen to convey both the technological environment of the area and its odd nature too.

Yunyun is an onomatopoeia for the sound a radio wave makes, usually associated with people acting silly, which could be why the area is translated as Screw-Loose Isles. 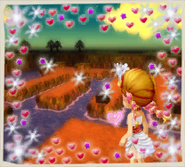 Zoom-out of the Isles
Add a photo to this gallery
Retrieved from "https://littlekingsstory.fandom.com/wiki/Screw-Loose_Isles?oldid=13434"
Community content is available under CC-BY-SA unless otherwise noted.