Skinny Ray (ガリガリレイ, Garigarirei) is Alpoko's local astronomer, and has a Observatory located in Farmland, which is abandoned at first. Skinny Ray is the character who theorises the source of the earthquakes, and predicts that the World is ending.

Once King Corobo defeats the Onii Man Guardian and is able to build Farmland, Skinny Ray appears. He thanks Corobo for clearing the land of UMA since he was not able to do his studies. Skinny Ray is an astronomer and spends his nights studying the sky.

Skinny Ray believes that the earthquakes are not natural that it is not the earth that is shaking but the entire universe. Most people do not believe in him, thinking his ideas are too farfetched. Later he asks Corobo to find pieces for a Flying Machine so he can find the true cause of the earthquakes.

During the day, Skinny Ray is seen riding a Penny Farthing and checking his telescope. In the second half of the story, he can be seen hard at work constructing the Flying Machine.

Every language's name for Skinny Ray is a reference the real life astronomer "Galileo" and the grain "garri" except the English version, which mistranslated "Garigari" as "Skinny," and romanised "rei" as "Ray". 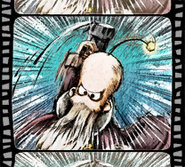 Skinny Ray from a beta cutscene
Retrieved from "https://littlekingsstory.fandom.com/wiki/Skinny_Ray?oldid=11393"
Community content is available under CC-BY-SA unless otherwise noted.