"Tiny King Corobo arrived at Sobamanjaro. He found a king up there. Upside-down and backwards!"
— Narration upon Corobo's return trip to Sobamanjaro

Sobamanjaro (ソバマンジャロ, Sobamanjaro) is the mountain at the center of the Tiptoe Kingdom, and the tallest point in The World, standing at 487 feet. Sobamanjaro is the stage for the Long Sauvage Battle, whose beard runs down the entirety of the mountain.

King Long Sauvage tries to prevent King Corobo and his Royal Guard from navigating the winding path up the mountain and reaching the top by attacking him with his magnificent living beard, as well as using help from his subjects the Mounties, and several UMA. Several adits allow Corobo to hide from Sauvage's attacks during the battle, but do nothing upon a repeat visit.

The mountain path winds up the south of the mountain. During Long Sauvage's fight, part of the path is blocked by gym equipment, forcing Corobo to take a side path around the back of the mountain to the Manjaro Cavern. This Cavern goes through the mountain, with the exit located nearer the top, but is closed off after Sauvage's defeat. This Cavern is maze-like and features a number of forks in the path, meaning Corobo must choose the correct path six times in order to proceed, by following the directions on the sign outside. Corobo must also order his citizens to create a bridge out of Sauvage's beard to reach the summit.

After Corobo defeats Long Sauvage, Sobamanjaro becomes open for tourism, and the Hiking Club led by Uncle Tin sets up a telescope at the top. Sauvage will still be there, standing on his hands. Chasing him up the Mountain and talking to him at the summit causes an Art piece and several fiery holes to appear on the mountain path which can only be put out by the Mountie in order to dig up their treasure.

At the summit stands the previously mentioned telescope, which allows Corobo to see his Castle in a manner similar to the Watchtower. A crane which once carried Sauvage's food up the mountain still stands here, as well as a Wonder Spot location and Sauvage himself, upside-down.

Sobamanjaro is the location of the final Kingstone. Ferne informs Corobo that she had left it there before Long Sauvage had kidnapped her. When Corobo arrives on the scene, Sauvage is holding the Jewel with his feet. To retrieve it, Corobo must chase Sauvage down using his citizens within a time limit.

These UMA only appear on the Mountain during Long Sauvage's fight:

Sobamanjaro is a portmanteau of Kilimanjaro, a real life mountain, and ソバ (soba) which comes from Long Sauvage's Japanese name ロングソバージュ (Rongusobāju). Since Long Sauvage's name is slightly altered in the English release, this means that "Sobamanjaro" is an incorrect translation, and should more closely resemble "Sauvamanjaro", named after Long Sauvage himself. 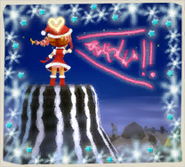 The Wonder Spot location at the peak

The base of the mountain in the Flying Machine clue

Concept art of Sauvage standing on Sobamanjaro's summit
Add a photo to this gallery
Retrieved from "https://littlekingsstory.fandom.com/wiki/Sobamanjaro?oldid=12386"
Community content is available under CC-BY-SA unless otherwise noted.