"I see the sunflowers and think of you!"

Sunflower Plains (ヒマワリの草原, Himawari no sōgen) is one of the largest areas in The World, and the second Wonder Spot. This area connects the Dark Valley to the Melon Patch. Other than sunflowers, the plains also has much tilled land, as well as Meloncholie that grow in it. Scarecrows point the way through the plains to the Melon Patch.

There are two gimmicks in Sunflower Plains. The first is that there are many twisting paths that allow Corobo to traverse the area in a variety of ways, forcing him to choose between a higher path or a lower path. The second gimmick, which is the basis for the area's name, Corobo and his Royal Guard encounter the nocturnal UMA, Moonflowers, after 6PM. The Moonflowers will disguise themselves as regular sunflowers, signified by the "sunflower" swaying faster than the others during the day.

The Sunflower Plains is accessed by either the Onii King's battlefield or the outer clifftop of Dark Valley. The Plains open with a field of many sunflowers, which contains a sign from the Sunflower Club recommending a Miner to make the journey through the plains easier, as well as the second Wonder Spot. A thin cliff leads to an Art piece, and teases the presence of the Marble Dragon on the other side of a large cliff.

Corobo can then choose one of two ways to go: staying on the raised hill path, which requires a Ripped Miner, or the lower path, which is more dangerous as Escargoo will shoot poison from above, but has several pots with arrows and a Hot Spring. The upper path curves around towards a middle section and passes a hole with a Gold Bar, as well as a Blue Tree containing an Art piece, whereas the lower path lead Corobo past several Meloncholies and a Cockadoodledo, but contains a peninsula with an Art piece. Past the Cockadoodledo is another fork in the path, both covered by logs: the northern path meets up with the upper path from earlier, and the southern path goes along the coast.

The southern path is the most direct route to the Melon Patch, but leads past several hills with Cockadoodles on top, which will shoot feathers at Corobo and his Royal Guard below. This path contains another Art piece and several holes that can be dug for treasure, before ending at the bridge to the Melon Patch.

The northern path contains another Hot Spring and takes Corobo up onto the cliff containing the Cockadoodledos. Corobo can walk across this hill if he has a Miner, and defeating a Cockadoodledo will net him a Weapon, and heading south at the end of this path will lead to the bridge to the Melon Patch. Going north instead will lead to a large Hot Spring and a Purse. If he drops off the side of the hill southwards, he will end up on the southern path from earlier. Corobo can also drop off on the northern side, which will lead to a small vegetable patch containing a Cockadoodledo and a hidden hole housing an Expensive Horn which can be sold for several million Bol. A path here leads to the Purse and large Hot Spring from earlier.

Finally, northeast from the Melon Patch bridge and south from the Hot Spring and Purse is a small field that overlooks Firefly Lake. The Wonder Spot for Firefly Lake can be found here, and if this area is returned to, a Concodore may appear.

Later in the story, a northern strip of Sunflower Plains can be visited via the Kingdom of the Jolly, after Corobo has defeated King Duvroc. This area contains two Art pieces and a hidden hole containing expensive treasure.

The music for this area is shared with the Forests: a slow, sinister remix of Schubert's "Marche Militaire" with several sections shifted around and repeated. 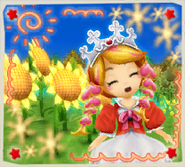 Part of Sunflower Plains in a Flying Machine clue

Sunflower Plains' location on the map - the path to the Kingdom of the Jolly is mysteriously missing
Add a photo to this gallery
Retrieved from "https://littlekingsstory.fandom.com/wiki/Sunflower_Plains?oldid=11940"
Community content is available under CC-BY-SA unless otherwise noted.